Posted: April 24, 2017 in In the News, Public Safety, Transportation 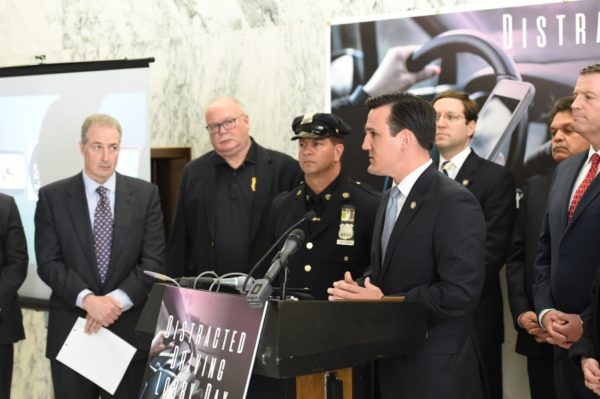 On Monday, April 24, Assemblyman Kevin Byrne participated in a press conference in support of legislation aimed to reduce the increasing threat of injury due to automobile accidents caused by distracted drivers. The proposed bill, named ‘Evan’s Law’ in memory of Evan Lieberman, a young man who lost his life in a car accident with a distracted driver in 2011, would set into motion a number of initiatives to combat distracted driving. Notably, ‘Evan’s Law’ would allow for the use of police technology to detect if a driver was using a cellular phone at the time of an accident without accessing any of the device’s private messages or personal data. Byrne, an EMT and volunteer firefighter who also suffered serious injuries in a car accident with a distracted driver on April 29, 2016, was vocal in both his support of the bill and the need for technology and protocols to police distracted drivers.

“As a first responder and an individual whose life was profoundly affected by a car accident involving a distracted driver, I have seen firsthand the need for additional oversight and support for policing this dangerous and all too prevalent crime,” said Byrne. “Distracted driving is a serious issue that affects us all, and unfortunately, the lack of attention paid to this matter has led to unconscionable scenarios like what we have seen with the Liebermans, where grieving families are forced to seek justice on their own due to the absence of investigation protocols needed for these accidents.

“Statistics show that without the necessary tools and equipment, it is nearly impossible to ensure distracted drivers are held accountable for their actions after an accident,” continued Byrne. “In the face of the digital age’s ever increasing array of hand-held distractions, I call on my colleagues to unite in support of ‘Evan’s Law,’ and reaffirm their commitment to keeping our roads safe.”