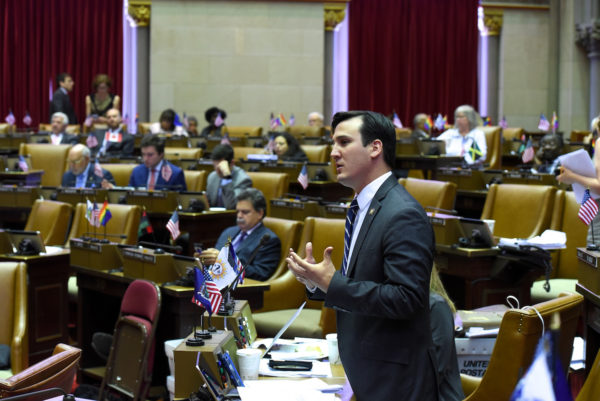 There’s an old saying, “Our liberty is never safe when the New York State Legislature is in session.” There’s definitely some truth to that. This past legislative session I successfully fought back against several initiatives that would have added to our state’s crushing tax burden, added excessive regulations on businesses that hurt job creation and chipped away at our constitutional freedoms.

That said, this past legislative session was not without its accomplishments.  By working with colleagues from both sides of the aisle, we:

Additionally, I introduced five new bills that address various local needs in the 94th Assembly District, four of which passed both the Assembly and the Senate. That brings our grand total to nine legislative successes that I introduced during my first term in Albany– more than nearly any other freshman Assembly member, and more than most Assembly members across the entire state.

Despite these successes, we still left the Assembly Chamber with a lot of unfinished business this year. Many important legislative proposals were held up in a disagreement between the Senate and Assembly Majorities. As such, I have called on the Speaker and the Governor to bring us back to Albany to do the people’s work. Additionally, the Assembly Speaker has refused to take up legislation which passed the Senate, including important bills that would provide for additional school safety initiatives like School Resource Officer funding, as well as additional security and mental health services in our school system. The people of New York have been craving action to protect the children in our school system and this is the perfect opportunity to do just that. Bring us back to Albany, and let’s get it done. Considering the Governor called us back to rename a bridge just last year, I believe it’s only fair he do the same to ensure the safety of our children.

Speaking of the bridge, as many of you may know, in the waning hours of this year’s legislative session, the Senate passed our bill to restore the historic “Tappan Zee” name to the Tappan Zee Bridge. I have been leading the charge in this fight since day one when I voted against stripping away the original name. Critics have said it was a lost cause and that it would never gain traction. The fact that our legislation has already passed the Senate, with bipartisan support from both Senate conference leaders says a lot. Speaker Heastie should listen to the people of the Hudson Valley and pass our measure to save the Tappan Zee!

It is a great honor and privilege to serve our neighbors as your representative in the State Assembly. Wrapping up the second year in my first term, we’ve accomplished a lot, but there’s still much to do. Together, with your support, we will continue to build a better, more affordable, future for all New Yorkers.