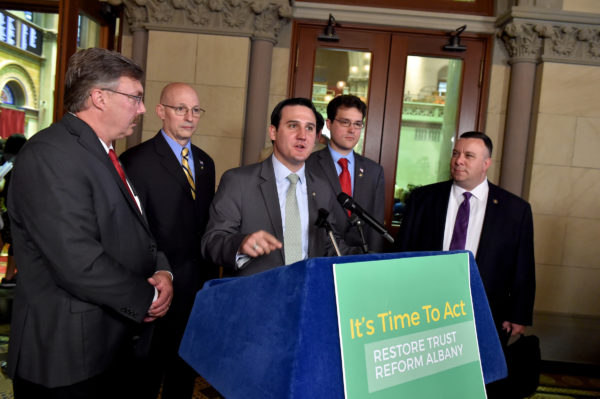 Assemblyman Kevin Byrne joined lawmakers in calling for ethics reform measures to be taken up before the conclusion of this year’s legislative session at a press conference in Albany on Wednesday, June 13.

Today, Assemblyman Kevin Byrne (R,C,I,Ref-Mahopac) joined Assembly Minority Leader Brian Kolb and several colleagues in calling on state leaders to address statewide cries for ethics reform in the waning days of this year’s legislative session at a press conference held in the state Capitol. With the recent convictions of former Gov. Cuomo aide Joseph Percoco and former Assembly Speaker Sheldon Silver fresh in their memories, the lawmakers urged their colleagues on both sides of the aisle to reaffirm their commitment to good government, and take steps to earn back the trust of New York’s overburdened taxpayers.

Byrne joined the participating lawmakers in urging colleagues in the Assembly and Senate to vote on several initiatives aimed at increasing accountability, transparency and honesty in state government. These measures include bi-partisan legislation establishing a database of economic development deals, FOIL requirements for quasi-governmental agencies, enhanced reporting for the struggling Start-Up NY program, applying Public Officers Law to REDCs and the Procurement Integrity Act.

“New Yorkers deserve an accountable, honest and transparent state government that works for them,” said Byrne. “The widespread abuse of state funds we have seen in recent years has saddled our already overburdened residents with a corruption tax, eroding trust in our state government and leaving us to foot the bill for our leaders’ misconduct. We cannot allow another legislative session to pass without answering the bipartisan, statewide calls for ethics reform, and I urge the Assembly Majority to follow the Senate’s lead in taking up this legislation, and join us in our efforts to deliver our residents the leadership they deserve.”

“Inaction from the Assembly Majority is simply inexcusable. With no explanation and no just cause, it continues to block much-needed reforms for no good reason,” Leader Kolb said. “New York’s economic development programs are broken, ineffective and corrupt. One would have to search long and hard to find another program so obviously in need of reform, and every day without action is an indictment on the Assembly Majority and evidence of its grossly-irresponsible approach to protecting New Yorkers’ money.”