Posted: May 1, 2018 in In the News, Infrastructure, Transportation 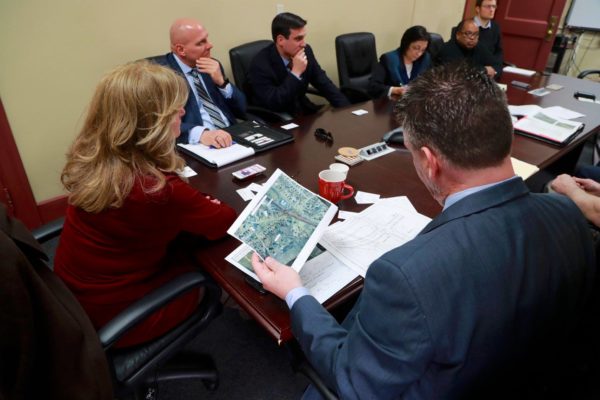 Albany, NY – The harsh winter left many roads in the Hudson Valley with potholes the size of craters and road surfaces that are so rough that driving on them should be considered an Olympic sport. Extreme weather calls for extreme solutions, and Senator Terrence Murphy is pleased to announce that 86 miles of roads in the Hudson Valley will receive a nearly $14.4 million facelift.

The fund includes improvements to the following roads in the 40th Senate District:
$1.8 million to resurface Route 100 between Parent Road and Route 202 in Westchester County.
$1.7 million to resurface Route 6 and Route 52 between Route 301 and Willow Road in Putnam County.
“The funding for this Harsh Winter Paving Initiative will be instrumental in upgrading some of our most traveled and essential roads,” said Senator Murphy. “It is important that the legislature and the Governor remain committed to this program because the safety of our roads and infrastructure is directly tied to our economic growth and quality of life. Working with my fellow elected officials we were able to identify two additional thoroughfares that need greater attention. I am pleased to say we were heard!”

Assemblyman Kevin Byrne said, “This is welcomed news that we have been advocating for. Investing in our infrastructure, especially our roads, benefits all New Yorkers. More resources are needed for the Hudson Valley and I hope this is just the beginning.”

Putnam County Executive Maryellen Odell said, “Thank you to our partners in state government and DOT Regional Director Lance MacMillan for listening to our concerns regarding road safety particularly in the Hamlet of Carmel. Collectively, we all recognized this to be a critical area due to its its relation to beautiful Lake Gleneida and the Putnam Trailway. By improving our roadways more of our residents will be able to utilize these wonderful attractions.”

Senator Murphy, Assemblyman Byrne and County Executive Odell met with DOT officials on April 10th to review the already planned paving of Route 6 from Reed Memorial Library toward Tilly Foster Farm. The Putnam County representatives expressed the need for additional paving heading south along Lake Gleneida which stands as the gateway to the hamlet of Carmel. Today’s announcement will accomplish that goal.

Senator Murphy continued, “I want to thank our partners at DOT for hearing our concerns and acting on them. This is how government should work.”

The monies are part of more than $100 million in state funding to repave and enhance roadways impacted by the harsh weather this past winter. Funding will support 84 projects and the renewal of nearly 1,000 lane miles of pavement across the state, including at least one project in every county and New York City. The new funding, awarded through the Harsh Winter Paving Initiative, is in addition to nearly $300 million previously recently announced by Governor Andrew Cuomo for projects that will repave approximately 1,600 lane miles of road across New York State. The unprecedented infrastructure investment will make state highways safer and more efficient, while encouraging local commerce and tourism. The projects will take place throughout the summer and into fall, and will be completed this year.

Somers Supervisor Rick Morrissey said, “The repaving of Route 100 is welcomed news as it is a major route leading into our town. We are thankful to our partners on the state level for helping bring attention to the need for its repaving. While any investment in state roads is a welcomed action there are still many roads that are in need of repair and repaving in our town.”

The State Budget included $65 million in Extreme Weather Recovery funds for locally owned roadways, and this additional $100 million investment will support the renewal of state-owned roadways. This critical funding is supported through the New York State Department of Transportation’s five-year capital plan and is in addition to the $743 million provided in this year’s budget in direct state aid to local governments for road and bridge repair and modernization.

(2018, May 01). State Antes Up to Pave Damaged Thoroughfares in Putnam & Westchester Counties. Retrieved from http://www.voteformurphy.com/news/2018/05/01/state-antes-pave-damaged-thoroughfares-putnam-westchester-counties/