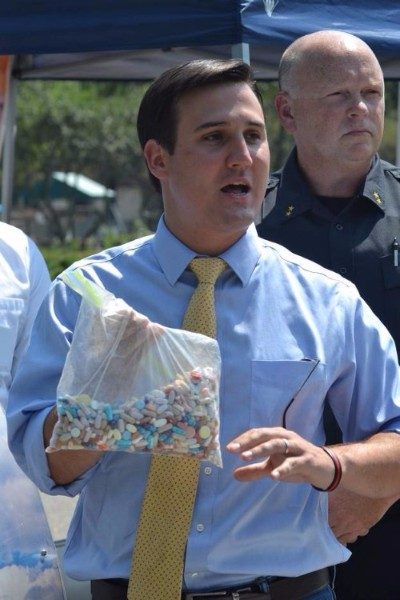 Jefferson Village in Yorktown was the latest stop on Murphy’s district-wide tour, which began in Mount Pleasant on July 31. Two weeks ago, he held a Shed the Meds event in Somers, where about 400 pounds of prescription medication was collected, according to Michael Jefferson, his communication director.

Ray Dorritie, a member of Drug Crisis in Our Backyard, a Carmel-based nonprofit organization, applauded Murphy for the initiative, saying, “People will live as a result.”

According to statistics, he’s right.

Seventy percent of people who abuse opioids get them from friends or families, said Liz Talbert, coalition coordinator for Alliance for Safe Kids, a Yorktown-based nonprofit organization.

Initiatives like this, Murphy said, are “common sense,” and he thanked the team of volunteers, first responders and elected officials who make it happen.

“This does not happen without their help,” Murphy said. “We’ve taken hundreds of pounds off the street just in this one location.”

Though special drug drop-off days highlight the importance of properly discarding prescription drugs (don’t throw them in the trash or in the toilet), it’s something residents are able to do year-round thanks to a box stationed in the lobby of the Yorktown Police Department headquarters. The box, funded by the Alliance for Safe Kids, is accessible around the clock, said Chief Robert Noble.

“Come on in, no questions [asked], and put it in,” Noble said. “Make sure you take it out of the [bottle], if you can, and always take your name off the label for identity-theft purposes.”

Det. Sean Lewis said the box is emptied monthly and the contents are incinerated.

Noble heaped praised on Yorktown’s elected officials, saying they “don’t choose to bury their heads in the sand” when it comes to the opioid epidemic.

He said Murphy recently awarded a $10,000 grant to the Yorktown Police Department for the purchase of a canine officer dedicated to narcotics. This will be the second canine officer to join the police department since the unit was revived two months ago.

Several years ago, Noble said, the town board also created a narcotics unit within the Yorktown Police Department. The unit consists of just one officer who works with Westchester County Department of Public Safety. In return, Yorktown receives assistance and resources from the county.

“The town of Yorktown has been one of those communities where we’re always out ahead of everyone else,” Grace said.

Deputy Supervisor Gregory Bernard also lauded the Yorktown Citizens Task Force Against Heroin, a nonprofit organization founded by Councilman Tom Diana. In recent years, the task force has hosted guest speakers and held training sessions on Narcan (a drug the reverses the effects of opioids). The task force also helped fund the Yorktown Police Department’s first canine officer, which will be introduced at the Sept. 5 town board meeting.

Councilman Ed Lachterman said medicine cabinets are often raided by teens for “Skittles Parties,” where party-goers pool their prescription medications together in a pile.

“This is where it starts,” Lachterman said. “This is a lot more than a gateway; it’s a huge, huge opening, and to close the door on this is tremendous.”

Assemblyman Kevin Byrne said issues like these are not partisan, citing Murphy’s 2016 bill limiting initial prescriptions for opioids to a seven-day supply. The bill was approved 62-0 in the senate and was signed by Gov. Andrew Cuomo.

Dorritie also noted that International Overdose Awareness Day, an unofficial day aimed at preventing overdose, reducing the stigma associated with it, and providing support to families and loved ones of overdose victims, will be celebrated Thursday, Aug. 31. Last year, he said, 63,000 Americans died of overdoses.